Becky Sun has submitted her resume to 80 companies since being dismissed from a midsized Beijing internet group at the start of the year. The former manager has done about 20 interviews but the job offers she landed required a pay cut of 50 per cent or more and a demotion.

“The opening I’m looking at now are no longer management level,” said Sun, who is in her mid-30s, adding that the job market was “the worst I’ve ever seen it”.

China’s Big Tech groups have suffered under a series of punishing regulations and fines as President Xi Jinping works to rein in their size and scope. The resulting tech sell-off — which at its deepest wiped out more than $2tn in market value — deeply wounded investors in Chinese technology companies.

The market pain has coincided with techno-authoritarian lockdowns that have hammered economic growth in the world’s second-largest economy. The outlook has become so bleak that last month Premier Li Keqiang summoned 100,000 officials to a nationwide video conference to urge them to take action and boost growth.

“It’s never been this hard to find a job,” said a 37-year-old account manager surnamed Qi, who lost a job at ride-hailing company Didi Chuxing’s group buying arm in December.

Last month, executives at Tencent and Alibaba vowed “cost control” was at the top of their agenda, repeating a version of the phrase more than a dozen times in calls with Wall Street analysts. Tencent executive James Mitchell last month said the company was slowing hiring and adding “lower-cost heads” to curb expenses.

China’s employment statistics show the unemployment rate for young workers aged 18 to 24 rose to a record 18.4 per cent in May. More than 10mn graduating university students will soon join the ranks of job hunters.

So many have already had job offers revoked that they have begun to joke about being “graduated” by tech groups, a euphemism for being dismissed, before their actual graduation.

The phrase bailan, roughly meaning “let it rot”, has also become popular among China’s youth to describe how they have given up trying because the effort is useless. It has joined pliers ping or “lie flat” as a new buzzword to capture their state of passivity in the face of a hopeless situation.

By spring, employees at the country’s biggest technology companies were being let go. Job losses at ecommerce group JD.com and vide-sharing site Bilibili caused an outcry when employees posted notices they received along with the bad news. “Happy graduation!” a letter from JD said. “Congratulations on smoothly graduating from JD!”

The steadily deteriorating job market has made 34-year-old product manager Kiro Lu wish he had accepted the offers he received last fall instead of holding out for a year-end bonus.

“The winter of the internet came,” Lu said. “Even the number of headhunters who came talking to me was fewer”. He added that he settled for a job in April at a small start-up that paid less than his previous job at Tencent.

One Beijing-based headhunter said her firm had shifted from recruiting for tech roles to filling positions at foreign multinationals.

“Previously, there were more job opportunities than job seekers, but the supply and demand dynamics are changing,” said another tech-focused headhunter in Hangzhou, who also asked not to be named.

“Demand for core talents remains . † † but for those relatively replaceable tech workers, they are being hit the hardest,” he said.

Some of China’s tech workers have embraced the job cuts. Myron Li, a marketing specialist let go by online real estate firm KE Holdings in May said he was spending his severance pay traveling around southern China. 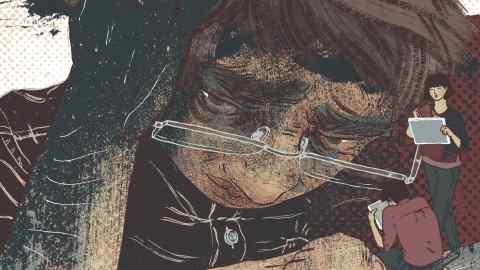 A recently fired engineer from Tencent said he was also not jumping back into the job hunt anytime soon. “I’m in lockdown at the moment so I’m just staying at home, watching documentaries and reading the books I couldn’t finish before,” he said.

China’s zero-Covid policy has made it even harder for Sun, the former manager, to find her next job. After a coronavirus case was found near where she had an in-person interview in April, her neighborhood committee, in charge of implementing Beijing’s zero-Covid policy, put her into a two-week home quarantine.

“We couldn’t leave home,” she said. “We bought a bunch of food, stocked up and then they came to seal our door shut.” She’s been doing video interviews and thinking of trying her luck in a new city.