Coming to Korea was no accident for Anjelica Morales. Getting into the K-pop industry was.

An aspiring singer, the 25-year-old business major at Pima Community College in Tucson, Arizona, barely knew anything about Korean culture when she flew halfway across the globe in 2018 to visit a friend.

It was her first time in Korea, a mere vacation — until she bumped into someone in the local music business.

She had no idea that was the opening of a door.

“It was the first time I was in an actual recording studio and it was so inspiring to me that I went back home to America and said, ‘I think I want to do music,’” Morales recalled.

“I wanted to come back and do it again — this time, more officially.”

Morales is now interning at SEL, a record company in Gangnam District, southern Seoul, where she’s gaining hands-on experience in the Korean music industry. Like many interns, she’s involved in a wide range of activities from writing emails, helping artists, planning music videos, finding locations and offering her personal insight on ways to break into foreign markets.

SEL was founded by Korean singer Junggigo, best known for his 2014 duet with Soyou on the hit song “Some.”

Morales discovered the internship through The Education Abroad Network (TEAN), a US-based education company specializing in immersive study and internship programs in the Asia-Pacific region, which connected her to the Seoul-based Global Education & Services. This summer alone, Global Education & Services helped place some 60 interns, mostly from the United States, in over 20 different Korean companies, including the Korea JoongAng Daily.

There are no official statistics on how many foreigners visit Korea every year for internships, but the CEO of Global Education & Services, Shin Woo-young, thinks around 200 have come to the country this summer. 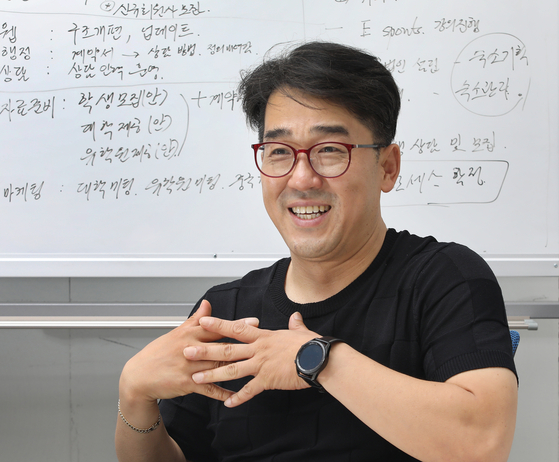 The 60 students that Shin is shepherding right now is a tremendous increase from last year when he first started introducing foreign students to Korean companies. They numbered less than 10. This reflects the world’s soaring interest in Korea thanks to Korean cultural exports such as BTS, “The Squid Game” and “Parasite.”

The easing of virtually all Covid-19 restrictions in Korea has also helped with the influx, Shin said. Foreigners can come to the country and local companies have resumed in-person work.

Most interns in Korea arrive through their universities or businesses that organize student travel, staying for a month or two on non-paid internships while receiving college credits. Among Shin’s 60 interns, about 80 percent are getting full or partial funding from their schools or fellowships, while the rest pay out of their own pocket.

Aside from connecting interns with Korean employers, Shin has also leased an entire hotel in the tourist district of Myeong-dong, central Seoul, to provide housing for them. All 60 interns live there.

“A lot of the interns we introduced to Korean companies this summer are working at startups across various industries and fields,” said Shin, who previously worked 13 years at Hanyang University’s International Affairs Office.

Internships in Korea are growing so popular among foreign students that Shin expects to handle at least 200 next year.

Emily Kruse, 23, a senior majoring in film at Central Washington University, who’s also interning at SEL, said it was Korean movies that inspired her to come.

“Everyone — especially in America – is talking about the Korean film industry right now,” said Kruse, who began her two-month internship in mid-June.

Rather than working on a film set, Kruse said she chose to work at a record company to get involved in making music videos, a career path she would like to pursue after graduating from college.

At SEL, Kruse helps the video director with tasks such as researching music video ideas.

An internship seems far better than coming to Korea purely for tourism, she said.

“My days are fulfilled by doing this internship rather than being here on vacation,” said Kruse. “I go out and get an overall feeling of the chill side of Korea, not the tourist side of it.”

Audrey Faue, 21, a senior at the University of Colorado Boulder double-majoring in business administration and film, also wanted to get a closer look at Korean movies by interning in the country that makes them.

“I’m from a pretty rural area and I’ve always wanted to try to live in a big city,” said Faue, whose dream is to work for an international film distributor. “I really wanted to do an internship abroad because I thought it would give me a lot of the necessary experiences to let me do jobs [on the global stage] in the future.”

As with all internships, the Korean companies working with the foreign interns have mixed reactions about their new coworkers.

Some interns fit so well that the companies have suggested they keep working together remotely after the interns return to their home countries. One American intern went to the US on a business trip with his Korean colleagues to partake in an exhibition. Competent interns are offered bigger tasks that require greater responsibility.

Yet, some companies struggle to overcome cultural and language barriers and end up not knowing what to do with their interns. Sometimes, the CEOs unilaterally decide to accept interns without fully discussing the matter with their managers, leaving them puzzled when a foreigner comes into the office asking for meaningful things to do, said Shin from Global Education & Services. 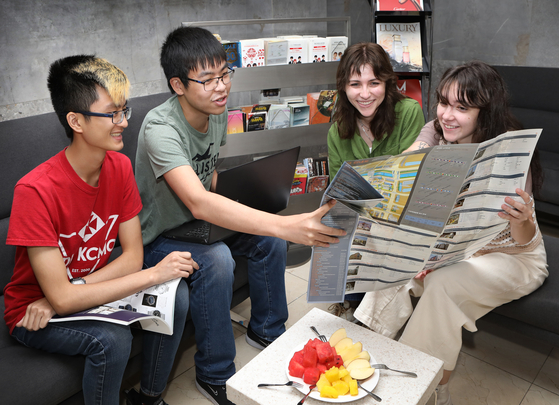 Audrey Faue, far right, a senior at the University of Colorado Boulder, with her fellow interns from Global Education & Services at a hotel that Shin leased in Myeong-dong, central Seoul, to house some 60 foreign students he introduced to Korean companies [PARK SANG-MOON]

Companies desperate to promote themselves in English and where roles are fluid often fall into the former category, while larger companies slip into the latter.

“When I first came into this business,” said Shin, “I thought private companies would be a lot more open-minded than universities. But what I’ve realized is that each sector and each company in Korea is so vastly different from one another in how they perceive foreign interns.”

Luckily, both Morales and Kruse have been exceeding SEL’s expectations, said Kim Gyu-tae, who’s in charge of A&R (artist and repertoire) and responsible for the whole album-making processes.

“It’s our first time working with foreign interns, let alone any interns,” Kim said. “I was worried about the language barrier because I personally can’t speak English well. But they turned out to be really proactive, and they’re offering a lot of insight for our overseas business.”

(Morales, the intern from Arizona, can speak and understand some Korean, allowing her to roughly interpret for her fellow intern Kruse.)

The only way to solve the problems Korean companies face when working with foreign interns, Shin said, is simply by keeping going.

“When international students first arrived at Korean universities, professors were told to teach in English and this really frustrated the Korean students because they couldn’t understand the courses,” said Shin.

“But things changed over time. Korean students have come to realize that you don’t have to be perfect in English to follow an English-language course or connect with foreigners.”

As for Morales, the internship at SEL has not only helped her improve her knowledge of the music industry. It showed her the value of hard work and opened up new opportunities.

“The networking that I’ve done here might help me launch my own music as an artist,” said Morales. “Not only have I made friends, but I’ve also made a lot of professional progress.”

She continued: “When I go back to the US, that’s the biggest thing.”